When the Covid-19 cloud lifts and we once again have freedom of movement, don’t waste a minute. Head out and investigate this wonderful country of ours. Start off with Guimarães, the historical town that’s a 45 minute-drive north of Porto. It is where it all began…

This month, on May 23, Portugal will be 841 years of age. Or maybe not. Historians and scholars cannot consent to an exact date but what is a fact is that on that date in 1179 Pope Alexander III issued a papal bull – Manifestis Probatum – officially recognising the self-proclaimed king Afonso Henriques as the first King of Portugal, and Portugal as a kingdom separate and independent from the Spanish Kingdom of Léon.

Afonso had waited a long time for this acknowledgement from the Pope because, despite all he had achieved in the name of Portugal, in medieval times the Bishop of Rome held ultimate authority over the Christian kingdoms of Europe.

The new Kings heroic exploits had begun more than a half a century before on 24 June 1128, when he – along with the Portucalense barons – defeated the armies of Fernando Pérez de Traba who was attempting to take over the governance of Portucalense county.

The battle was won at São Mamede field in the town of Guimarães north east of Porto. Later, in 1139, Afonso – who was ruling from Coimbra – left to do battle in Ourique in the southern part of the country, against the army of five Moorish leaders of Sevilla, Badajoz, Évora, Beja and Santarém.

Afonso Henriques gained a territory vast enough to assert itself as a Kingdom; thereafter he began using the title of King. On 5 October 1143 the Treaty of Zamora was signed. In it, the king of Léon and Castile recognised Afonso Henriques as King and Portugal as independent entities thereby bringing peace between the two countries.

These three key dates are each reckoned as being the birthday of Portugal but it is the northern town of Guimarães that is recognised as the birthplace of the country: not only did Afonso Henriques win a decisive victory there,  but it is also the town of his own birth.

Then and now, intertwined

Today Guimarães is a busy, important industrial hub but at its core is a national gem. It is the location of one of the best preserved medieval towns in all of Iberia. Narrow cobbled streets are lined with tall stone houses with timber framed upper floors. One of the oldest of these streets is Rua de Santa Maria which was built in the 10th century to connect a convent with Castelo de Guimarães which dominates the hill above the town. The construction of this magnificent castle was ordered by the Countess of Galicia, Mumadona, as a place of refuge for the townspeople from the constant attacks by Vikings from northern Europe and from Moors who controlled the southern parts of Iberia. It was in this castle that the future first king of Portugal Afonso Henriques was born in 1106.

Close to the castle at the base of the hill stands the equally impressive Ducal Palace or Paço dos Duques de Bragança built by the first Duke of Bragança in the early part of the 15th century. An imposing bronze statue of Dom Afonso appears to protect the entrance to the palace. Its unusual design was influenced by the European baronial styles which were popular throughout France and Germany and its multitude of red brick cylindrical chimney stacks are visible from most parts of the town.

The Bragança dynasty moved to Vila Viçosa near Évora in the 16th century and the palace fell into disrepair. It was then occupied as a military barracks and in the 19th century was used and abused as a quarry by the town’s people who stripped it of a considerable amount of stone until finally it was rescued and restored. It now houses a museum containing beautifully carved antiques, detailed tapestries, painted ceilings and stained glass windows as well as exhibitions, recently Medieval Machines of Torture. It is also the official residence of the President of the Republic when he is in the north.

The house of Bragança became one of the most powerful families in Iberia. Catherine of Braganza, as she became known, married Charles II of England which cemented an alliance against Spain. She is credited with bringing the custom of taking afternoon tea, a popular custom amongst Portuguese nobility, to England and is also the inspiration for the naming of one of New York’s largest boroughs, Queens. Portugal is no longer a monarchy but if it were then the current Duke of Bragança, Duarte Pio, could lay claim to the throne.

The old town contains a number of lively squares with cafés, bars and restaurants. Praça de Santiago and Largo da Oliveira are the most charming. The latter contains the Triumphal Arch of Guimarães’ built in 1342, known as The Salado monument, the church of A Nossa Senhora de Oliveira and, adjacent to it, the Museum of Alberto Sampaio housed in a former convent complete with decorative gardens and cloisters. The museum hosts a diverse range of important exhibits , religious gold and silverware alongside statues, wood carvings, ceramics and paintings. It was a favourite place of Portugal’s 1998 Nobel Prize winning writer José Saramago who liked the way the exhibits compared and contrasted in their medieval setting. 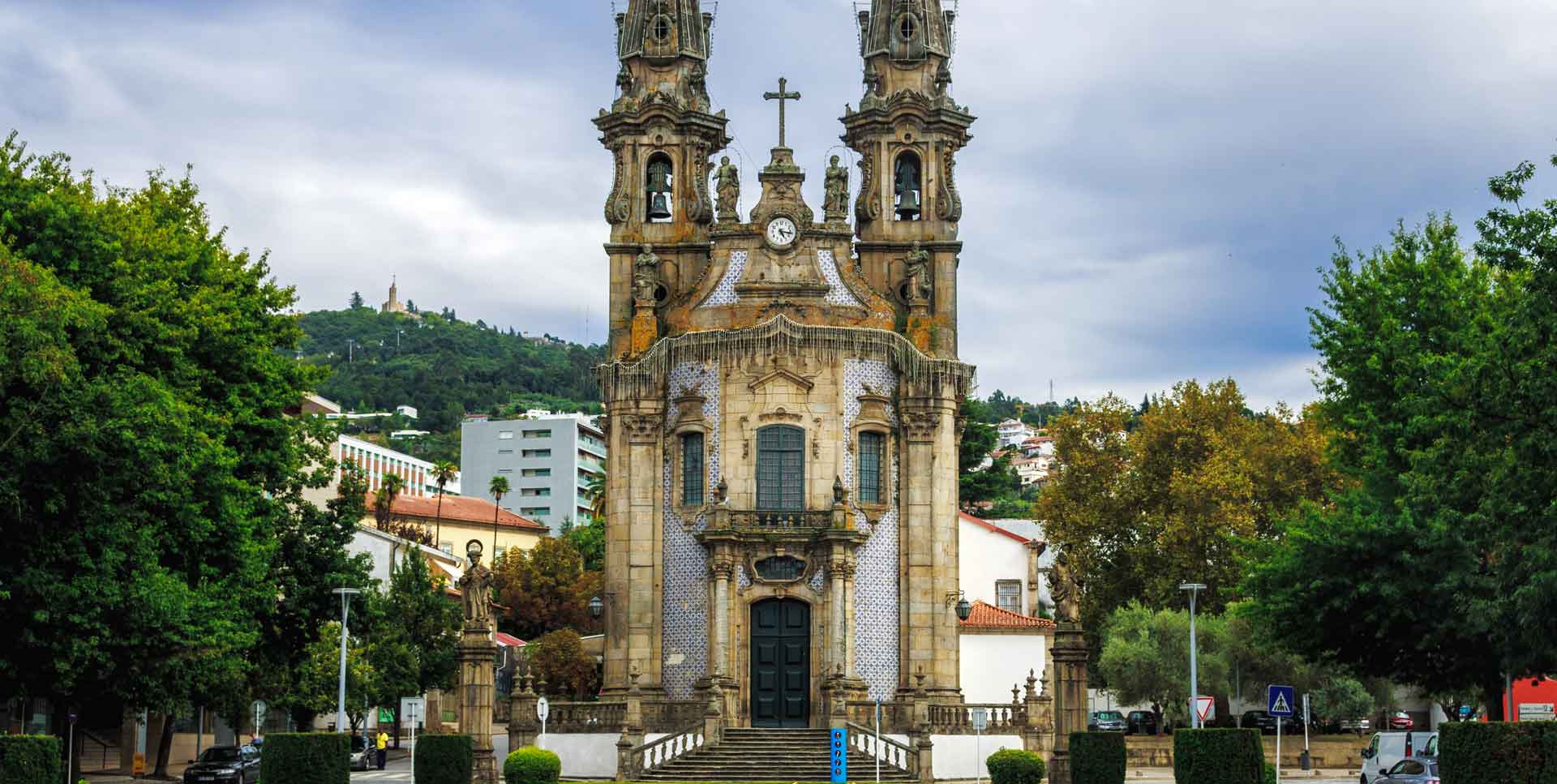 As is common in Portugal’s historic towns there are churches and chapels dotted throughout. Back up near the castle is the Igreja de São Miguel do Castelo where Dom Afonso was baptised in 1106 and the baptismal font bears a descriptive testimony to the event. The church is a modest, perfectly- scaled rectangular stone building with a tiled roof and little ornamentation. Outside the historical centre of the town but equally interesting is the Igreja dos Santos Passos. Originally built in the 16th century it has undergone modifications in the baroque style and in 1785 two bell towers were added which gave the church a unique almost top-heavy appearance. It is at the end of a broad avenue in Largo de São Gualter.

During the first weekend of August each year the church becomes the focal point of the Festas Gualterianas. The streets and monuments are elaborately illuminated, processions take place and there is a ‘Battle of Flowers’. It is in honour of São Gualter (Saint Walter) who, along with a companion, Brother Zacarias, was sent by St Francis of Assisi to Portugal in 1217 to establish a friary in the country.

While Zacarias moved south and established convents in Lisbon and Alenquer, Gualter remained in Guimarães and so began a long association between the town and the Franciscan Order. On a hilltop overlooking the city at 400 metres high sits the sanctuary of Nossa Senhora do Carmo da Penha. It is set in a beautiful natural park with diverse forestry and giant granite boulders and offers amazing views across the country and to the ocean in the west. It is accessible by road but a more popular way to reach the summit is to take a ten-minute, 1,700 metre cable car ride, the first of its kind in Portugal. The summit also has restaurants, a hotel, cycle and walking routes and even a campsite.

Portugal has a rich and varied history that is overlooked in the story of Iberia and Guimarães is an important part of that story and it is well worth a visit.

Get updates about our next issues